One year ago, as the world shut down due to Covid, I lamented about little things like race cancellations. I’d already experienced a cancellation much earlier in the year as I’d planned to race the Gaoligong 165k in China, and my backup race, the Chuckanut 50k was cancelled a couple months later. Rachel knew I’d be bummed because I’d trained quite well through the winter, and arrived home that evening with a list of ideas for attempting an FKT as part of a Spring Break road trip. Of all the ideas on her extensive list, it was the Lost Coast Trail that caught my eye immediately. So, a week later we were driving down to California with all our supplies in our van, intent on simply spending time in the wildness and away from people during the beginning days of the pandemic. Shortly before we reached California, we learned that Humboldt Country had issued a stay-at-home order and we reluctantly pivoted plans once again to run the Rogue River Trail. That is still a great trail and well worth the trip, but it wasn’t worth the poison oak I struggled with the next two weeks! Those first weeks of the shutdown will always be burned into my mind with memories of itching horribly while watching Tiger King.

Views from the Rogue River Trail FKT in 2020

This year, as Spring Break approached, we began plans to again get down to the magnificent northern coast of California, driving through the redwoods to reach the Lost Coast. Rachel would make the smart decision to not come along as she worked hard on her thesis defense, but my good friend Jordan is always up for an adventure and is my most faithful crew member. Jordan meticulously planned the crewing points and made significant drives from Mattole Beach to Shelter Cove, and Shelter Cove to Usal Campground. What a pal.

The Lost Coast Trail FKT has been held by Dylan Bowman and Jeff Mogavero, and I’ve spoken with both of them over the years about their approaches to the trails. Dylan says south to north is the way to go, cruising the long fast descent into Shelter Cove and getting the climbing done first thing. Jeff says you should go north to south, taking advantage of the prevailing northerly winds along the beach section. One thing they agree on is that the trail is an all-time adventure. I went back and forth regarding my own approach but ultimately landed on the north to south route for two reasons that had nothing to do with speed. My number one reason was to take care with the intertidal zones and not have to leave timing to chance by having to guess when I’d get through the long, arduous southern stretch. The run through this northern section absolutely must be timed with low tide. Second, I wanted to appreciate the views of the entire route and starting from the south would mean running 3-4 hours in darkness. One added benefit to the north to south route is getting the soft sand done first to finish on trails I’d feel were at least somewhat similar to what I run on in the northwest. 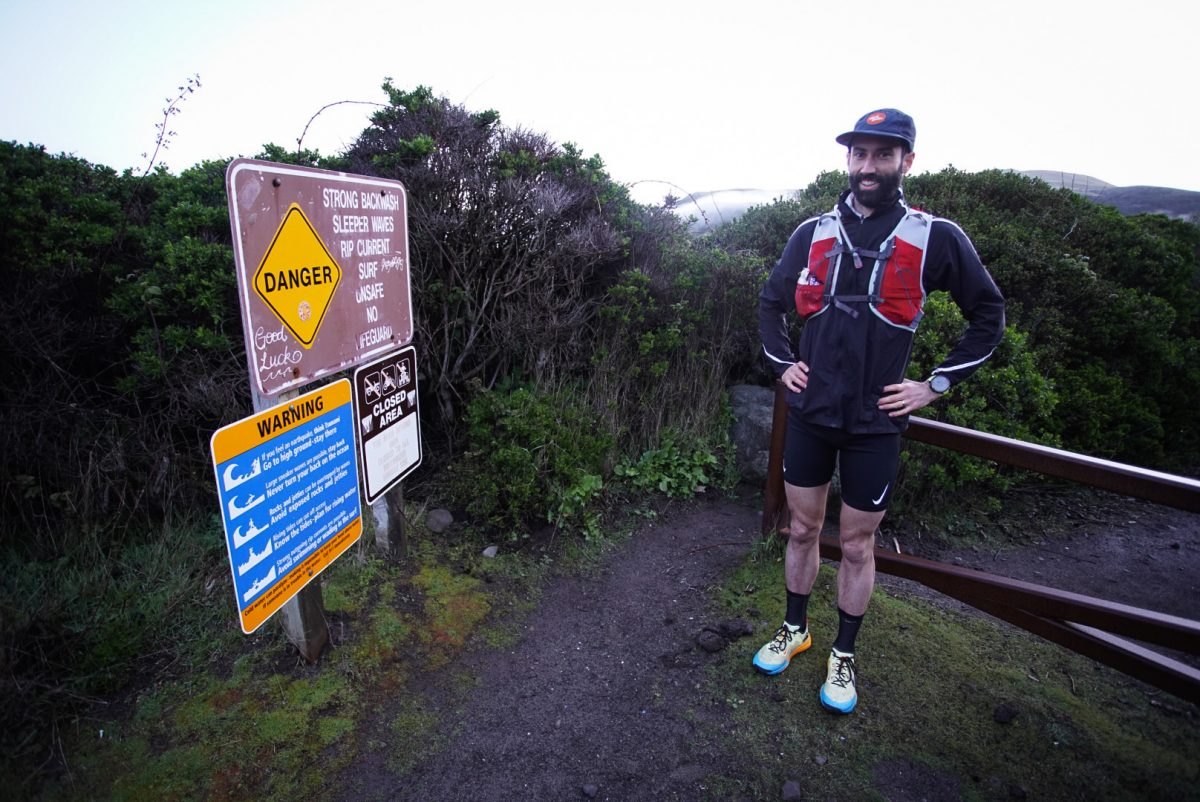 We camped at Matolle Beach and enjoyed an absolutely mint evening with dinner on the beach, a little jog to scout out the first few miles of the route, and I even whittled a little wizard face on a piece of driftwood. We organized gear and made contingency plans in case one of us would fail to arrive at our rendezvous points. This is also a must for this route as the driving is unforgiving along winding, remote roads. We were relieved to not make our start too early, deciding that a 7:15am departure the next day would mean a receding tide for the entirety of the intertidal zone running.

The morning was cool as I set off and picked my way through about every surface you can imagine in the early miles of the Lost Coast. I was alert and intentional about every step, trying to get the firmest ground whenever possible. While there are plenty of slow stretches of sand, there are also long and fast gravel stretches that allow you to gobble up trail quickly. The landscape is fantastic. I was grateful to be out there to enjoy new-to-me trails and get some inspiration for the coming spring training with a grand adventure. The ground near Punta Gorda Lighthouse four miles in was littered with seals and sea lions, certainly not the only wildlife I’d encounter. The weather was perfect as well, just slightly foggy to keep the morning cool. I was pleased with my running during this section and checked my pace often as it’d fluctuate between 7:00/mi on hard packed surfaces and plunge to 8:30/mi in the sand. I chose not to fight it and simply run the pace I was given. I have a feeling that attempting to run much faster, rather than prioritizing efficiency, would provide diminishing returns. With more and more power you could run a little faster, but that benefit likely wouldn’t be worth the cost. This first stretch, 25 miles from Mattole Beach to Shelter Cove, is a lovely run and well worth the trip in and of itself. When you haven’t run the trail before, pacing is a shot in the dark. I just got going in the first stretch and reached Black Sands Beach Trailhead whenever I would to see if I might be on pace. The final 6 miles get tough as they’re completely on sand and take the pop out of every step. I’d reach the Black Sands in 3 hours 45 minutes, about 5 minutes ahead of Jeff’s time, but wondered how my legs would respond after a flat but admittedly tough stretch of beach. 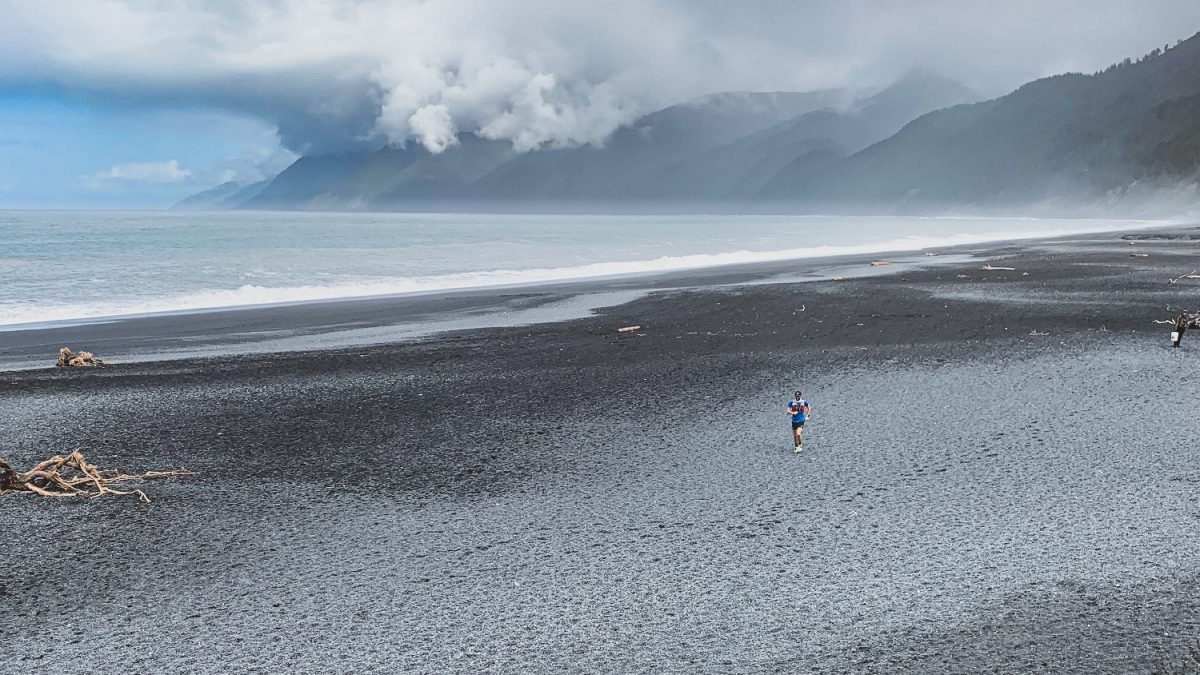 A long, four mile road climb shoots straight up from the beach before heading into the Sinkyone Wilderness. Jordan was there to take my pack and hand me a bottle of Maurten and I quickly got rolling up the climb, using the curving road’s tangents to save a few steps here and there. This climb is steep and boring, but it was certainly nice to get onto firm ground and I settled into a nice groove. At the Hidden Valley Trailhead, I took my time to prepare for the deep wilderness that awaited. That included changing into a fresh pair of socks, putting on pants to protect from the overgrown vegetation, refilling my pack, eating plenty of potato chips and drinking coke, and grabbing my Leki poles. From there, I shoved off in hopes of a strong run all the way to Usal Beach.

The trail gently climbs to the top of Chemise Mountain and the manzanita and pine reminded me of the Western States Trail canyons. Running in this environment was getting me excited to begin a new training block that would lead to the WSER startline in late June. Following this climb and some sweeping views of the ocean, the trail plummets on steep and technical trail that I’d soon grow accustomed to for the rest of the route. The trail then follows a jeep track around Needle Rock and the trail becomes quite fast and flat. The day had turned beautifully sunny and the trail skirts along green bluffs with the ocean in the distance. I believe I saw some of the best camping spots I’ve ever seen on this stretch, in meadows under big trees with views of the sea. A reminder to do this a little slower sometime. 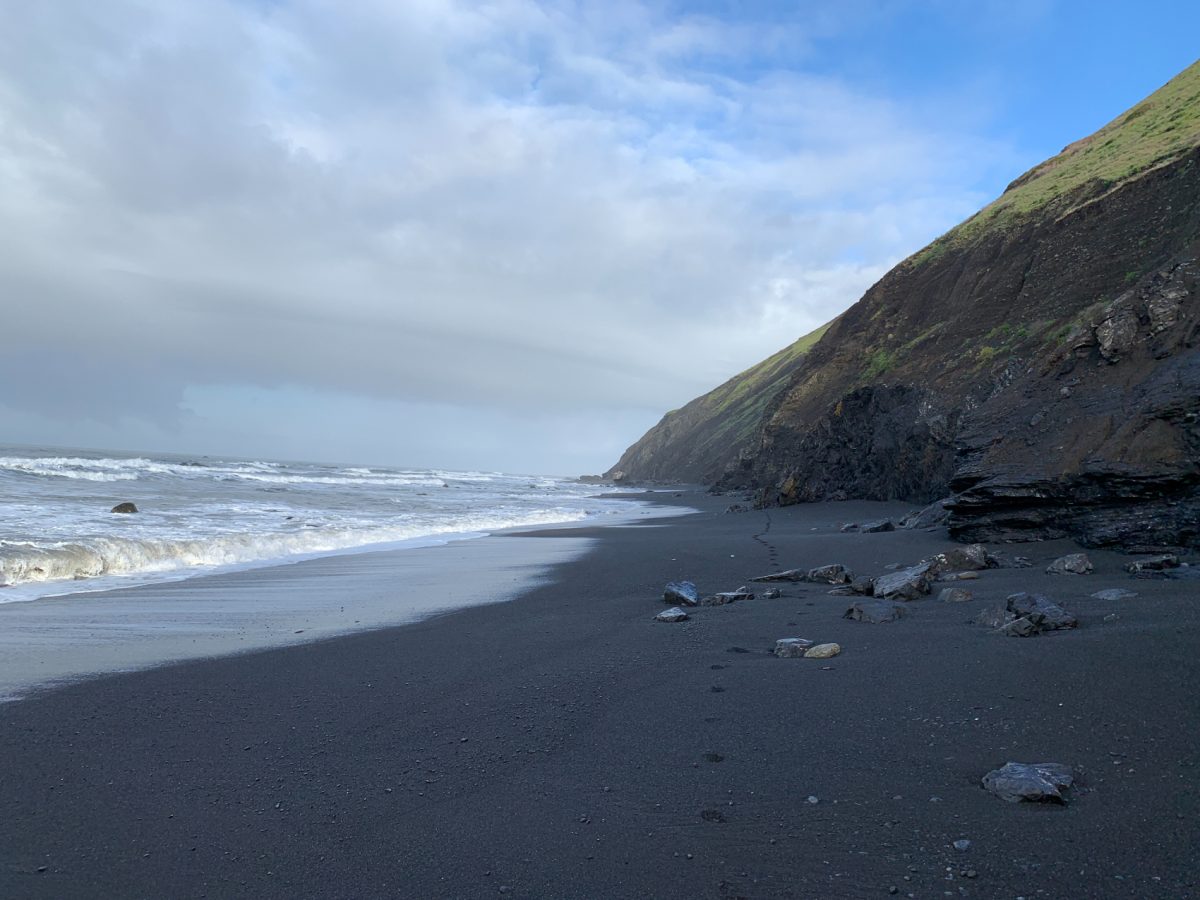 I started to do the math and wondered how fast I might finish, assuming that I was smoothly sailing all the way to Usal Beach. However, the final 15 miles are tough. The trail was overgrown and fainter than ever and the climbs were fairly long and steep. With 40 miles of running already in the legs, it was only now time to do over half of the climbing for the entire route. Unlike most hard runs lately, I was craving solid food and happily ate a couple Trail Butter Lil Squeezes that hit that spot. I took them one at a time, checking my watch and counting down to the final climb. I was descending well, but certainly starting to lose the pep in my powerhiking step. Finally, with all the climbing behind me, I knew I’d have to really start ripping to sneak under Jeff’s solid FKT. The trail finally widened and I was able to open up. Assuming I still had a mile to go, I was elated to see the Jordan waiting for me just below as I peeked through the trees. My GPS watch had missed a total of a mile along the journey, and I was surprised to be finished earlier than expected, sneaking under the previous FKT by 10 minutes. 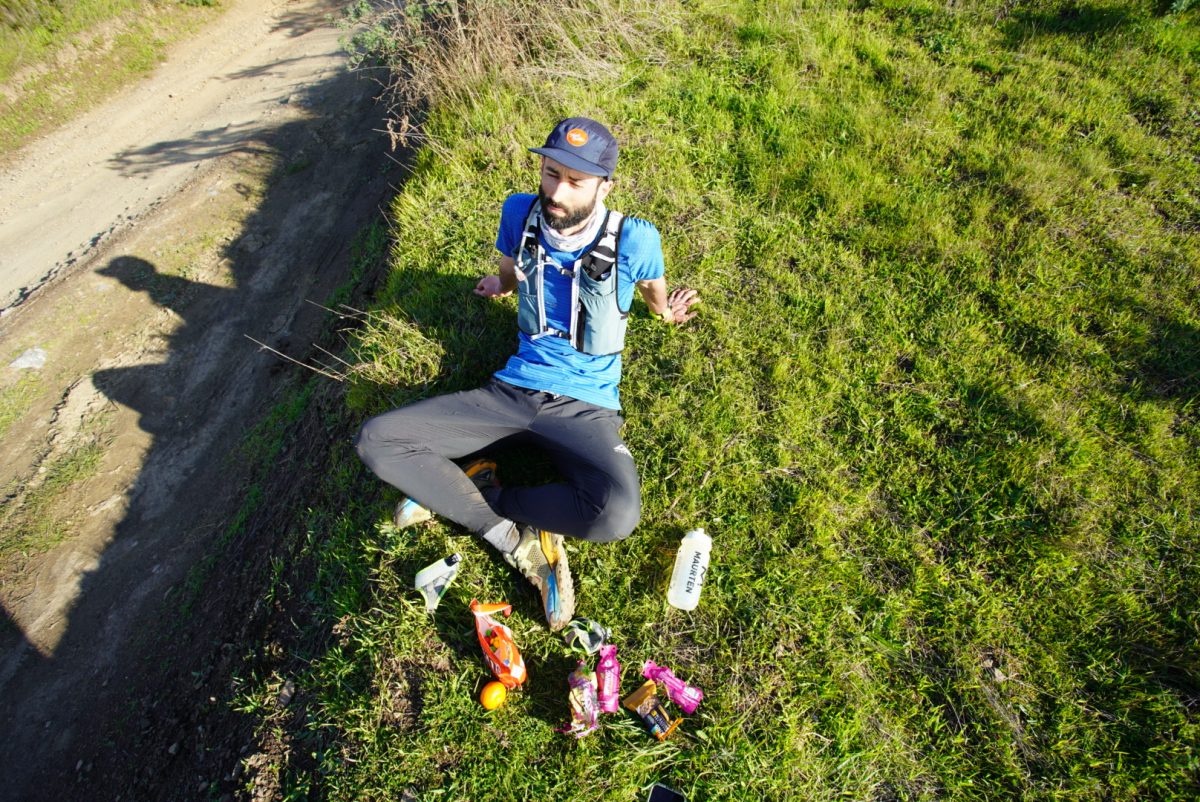 I’m so happy with the day I had out there. The views and experience were spectacular on so many levels. Whenever you can spend a day discovering completely new places, that’s going to be a good day. Running in new places is what really compels me to keep lacing up my Nikes to go on trail runs. Sometimes that happens on big, eventful runs like this, and sometimes all it takes is a new route in my own familiar neighborhood. I find the winter often pushes me more and more towards what’s familiar. Get the training done and get back to hibernating. Perhaps this is something I need to work on, accepting the beauty of winter for its own sake rather than shying away. Regardless, when spring arrives, it’s really time to start exploring again.

As far as this journey, I’m happy to say I got what I’d come here for. Not the FKT, though that’s nice, but really just a grand adventure and an experience that goes deeper than words. 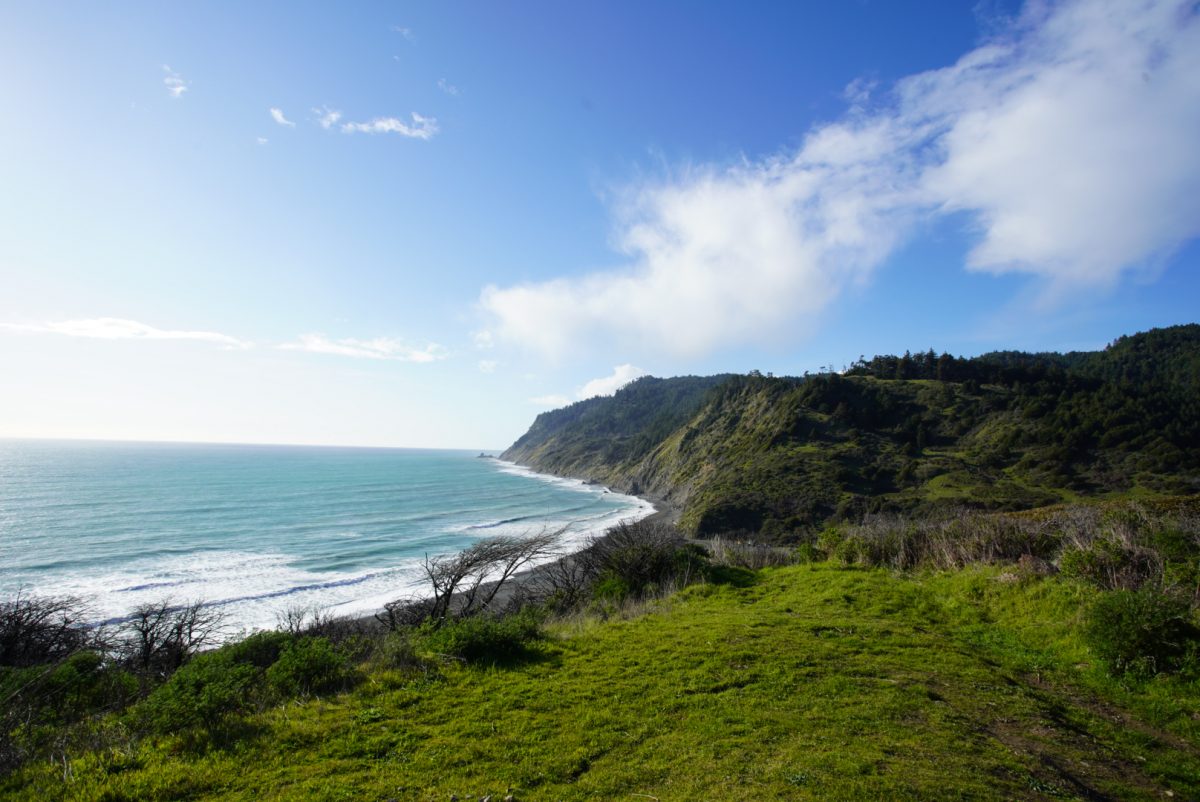 A few other notes before I sign off here. The poison oak is real. I tried preventing it and still got it bad. Wear pants, bring Technu and wash off immediately. Jeff’s previous FKT was fast, and likely done under much more difficult conditions. It was warmer and the vegetation was thicker, including much more mature poison oak and stinging nettle. I’m not sure what time of year would be best for this route, but I wonder if early fall, when vegetation is lighter and temps milder, might be the best window of all. Lastly, you don’t have to run this fast! Aspire Adventure Running puts on a three day guide trip of the route, and by all accounts it’s pretty great, with good food and support. Abram from Aspire was invaluable with his advice about the trail, including important knowledge about safely passing through the intertidal zones.

Strava data of the FKT here