My Experience: Ryan Ghelfi here with Trails and Tarmac, ready to give you the rundown on the Black Canyon 100k course in central Arizona. I ran this race back in February 2015. I was fortunate to be able to spend a few weeks leading up to the race in the area, training on all the sections of the trail multiple times. I found that I became quite fond of this piece of southwest desert, the looming Bradshaw Mountains to the West, and the quiet stark beauty of the landscape. On race day the temperatures were quite hot after the first 20 miles or so (more on this later). The competition was solid, and I was so close to gaining a golden ticket, getting passed in the last 15 miles and coming in third, six minutes shy of that elusive Western States spot. Still, I loved this race, and the course itself.

The Nature of the Course:  The Black Canyon 100k is runnable! Well, not all of it, but lots and lots of it. The first 6-7 miles you’ll be up at moderate elevations where the soil soaks up water and can be very very muddy, but it’s quite flat. If it has rained in recent days prepare yourself for some shoe sucking ground before you drop off the higher plateau into the desert below.

The long mostly downhill segment from mile 7-20 is where I think most people set themselves up for future misery. It’s very smooth, very early in the race, and too tempting to try and “bank some time”.  The gradient off the higher plateau is modest, around 200-300 ft per mile for much of the time. Clicking off miles too quickly here is one of the main pitfalls runners make at BC100k. Take in the views, relax, and don’t try to press!!

From mile 19.5 to the finish you only lose another 500ft net, so at this point the course starts to get real. Up and down, and more technical than the running during the first third of the race. It’s generally quite runnable, but also punchy. I’d consider it a perfect combination of good rhythm running while having enough variability to keep you engaged in the process. 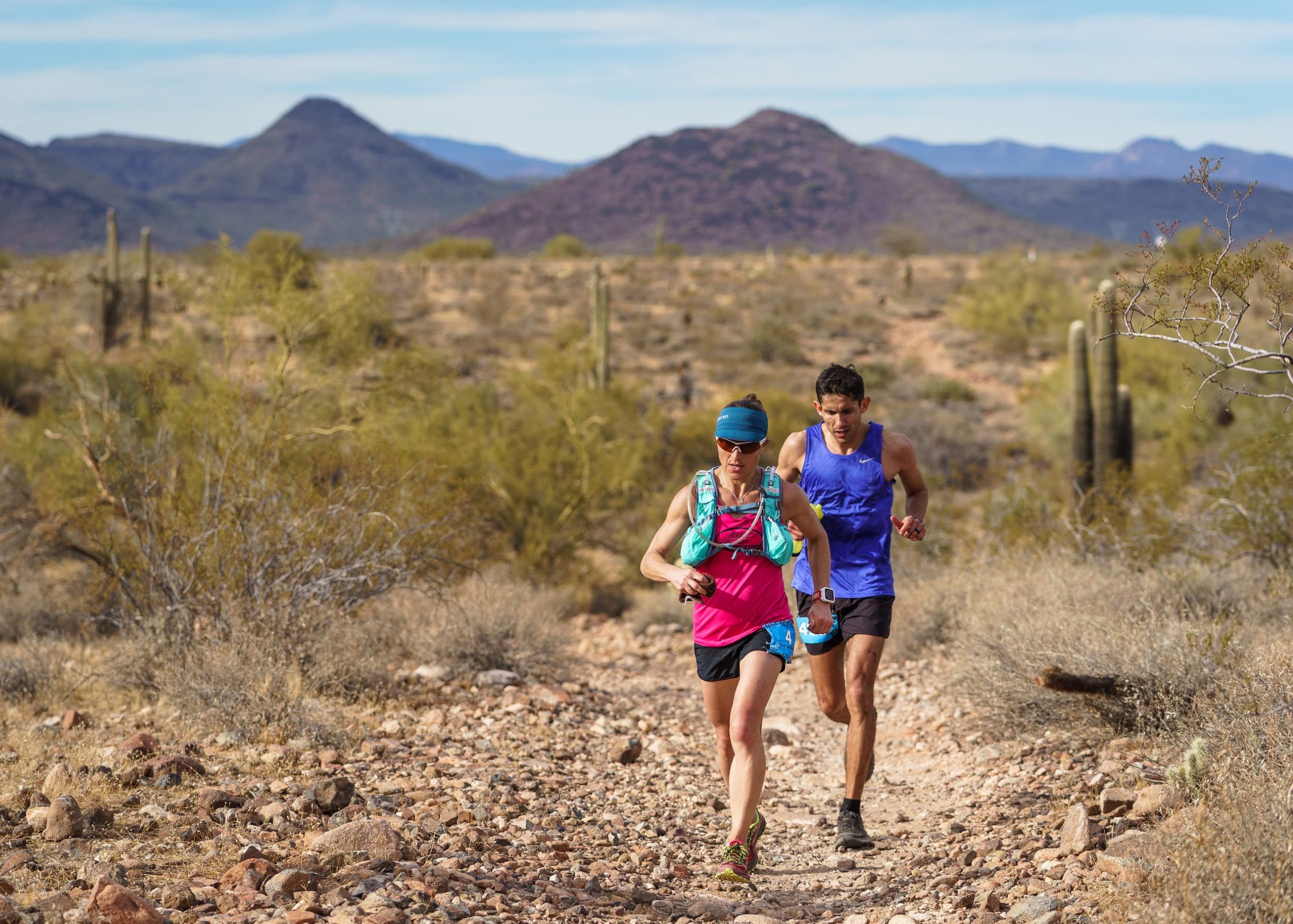 Elemental Obstacles: Black Canyon gets its name for a reason. It’s sun baked! This course has very little shade on it. I might go so far as to say zero shade. There are years when the temps are in the 50’s or 60’s but there are also years when temps can rise into the middle or high 80’s. (The year I ran this race it was HOT!) So, I would consider planning for, and to a certain extent training for heat. Plan for the worst, hope for the best. It’s hard to train for 80+ degrees in the middle of winter, but there are a few options. Even if you don’t train for the heat, mentally preparing for that possibility can be crucial.

River crossings are the second key elemental feature on this course. You will cross the Agua Fria River three times. You will get your feet wet. These crossings come between mile 35 and 50. If you combine wet feet and hot temps, plus a lot of time and friction you will have a recipe for some foot pain. There is not a ton you can do about it, but knowing it might be an issue, having a foot repair kit with your crew is a good idea on this course. You can also switch shoes for the final 11+ miles at Table Mesa aid station since you won’t be crossing the river any more after that 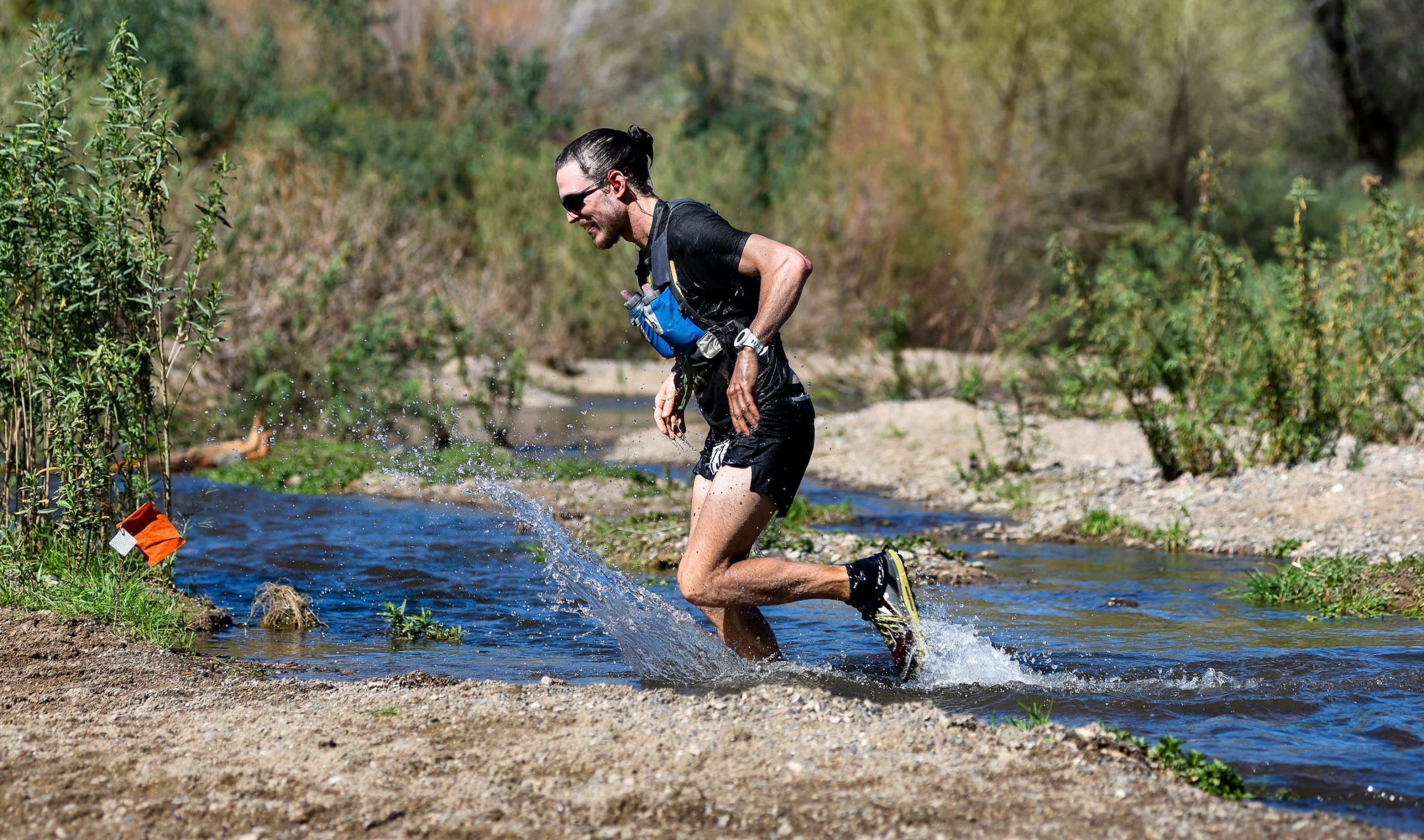 Common Mistakes: Creating too much muscle damage on the long gradual downhill from mile 7-20 is the biggest mistake in my view. Another mental mistake people will make is to look at the profile and think “oh this race is downhill, it’ll be a breeze” When in fact the final 42 miles are anything but downhill. When you have the majority of the climbing off set into the final 2/3rds of the race it’ll feel way less downhill than you might imagine.

The second mistake is that runners will continue to press a bit too hard from mile 20-30. This is the time when you want to make sure you are fueling and keeping your internal temperature from rising too much. Having your gut go bad on you before Black Canyon City at mile 36 because you got overheated is going to make the final marathon ROUGH. 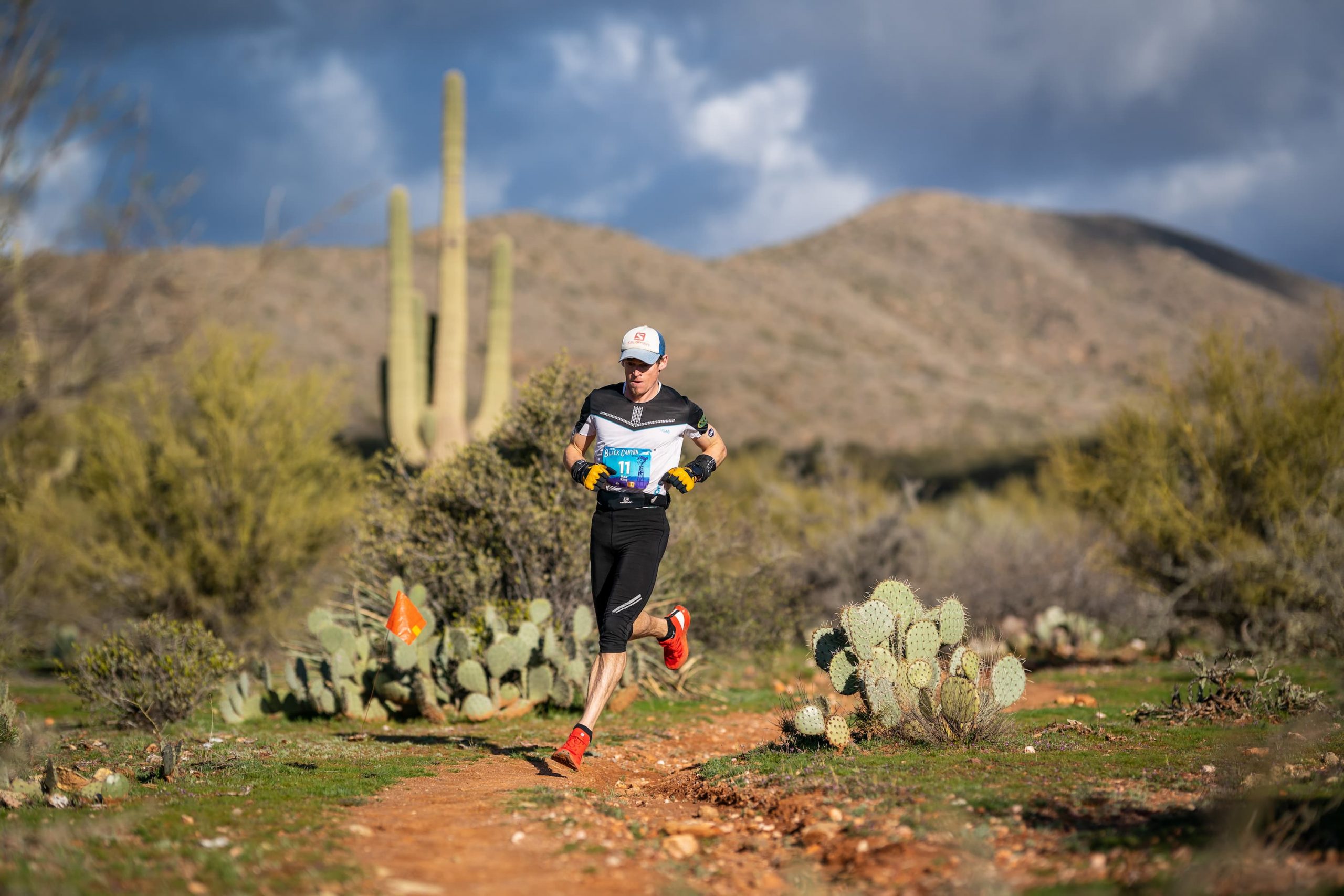 Key Training Tip: Try to simulate the course in training! This is a helpful tool for most races that you might run, but I think it’s particularly important at Black Canyon. Plan to do one or two of your key long runs with a downhill start and rolling, punchy climbs during the second half. Run the rolling second half of the run at what you expect will be race pace.  If you can choose a warmer day for these key long runs, or just add another layer of clothing it won’t get you physiologically acclimated to warmer temperatures, but it will help mentally as well as helping to train your gut with a bit higher heat load on your system. 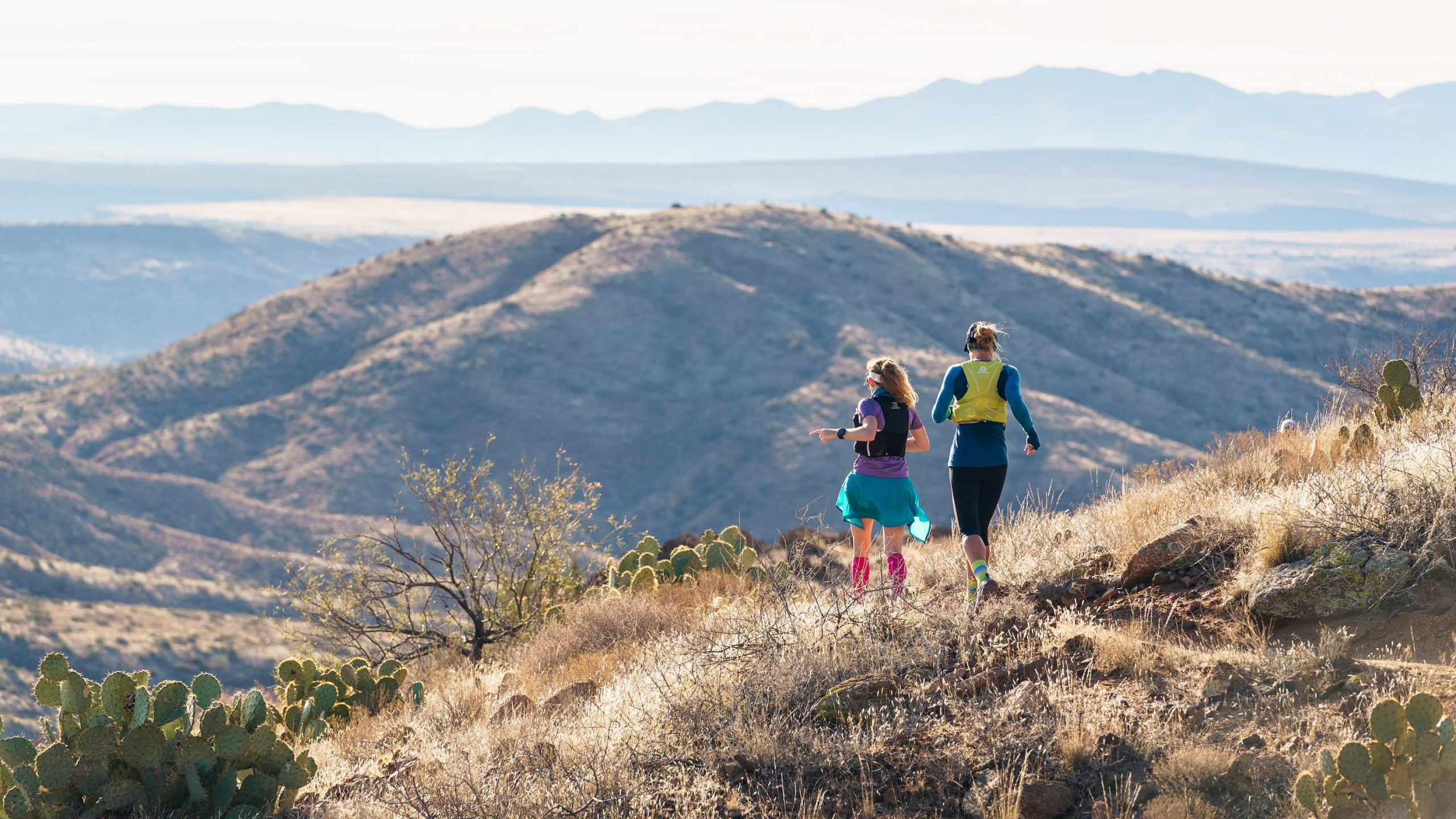 Bottom Line: The Black Canyon 100k course is incredibly scenic and will enchant desert lovers without a doubt. The logical and aesthetic point to point nature of the course makes it all the more unique and worthwhile in my opinion. You will really feel like you are going somewhere and you will get to see the course and your surroundings changing as you descend from the middle altitudes at the start to the desert canyon below.

While the average high temperature in Black Canyon City in the month of February is only 67 degrees don’t let that fool you into thinking it won’t be hot. It MIGHT not be hot, but it definitely could be. And even if the forecast high is only 72, but you are coming in from Detroit, it’s going to be a major factor during your race. Get your crew cooler and fill it up with ice!

If you haven’t run Black Canyon before, put it on your list. Even if you aren’t the Golden Ticket chasing type this is a course that is well worth the time and energy. The race atmosphere is exciting and it’s well organized as you might guess. In the United States you’d be hard pressed to find too many better trail ultra options in the month of February.

Have you run Black Canyon 100k? Tell us your thoughts in the comment section below. What were some of the strategies that did or did not work for you that might help others as they are preparing for this modern day classic American ultra?