TLDR: Be prepared to climb, sweat,and pack your own nutrition for this minimally supported 50k. The backcountry terrain and expansive views are breathtaking and worth coming back for. At the very least, scroll for amazing race pictures by James Holk.

I had the honor of being able to run the Backcountry Rise 50k a few weeks ago, along with several other Trails and Tarmac athletes. Personally, I had very little idea what I was signing up for, aside from this 50k working well with my training, work, and travel schedule. Being at the end of August means that runners have a few solid months of summer training to prepare. Obviously the beautiful pictures on Ultrasignup.com were a selling point, along with a challenging elevation profile, with about 7500’ of gain. Backcountry Rise is organized by Daybreak Racing, and staged out of the Mount St. Helens Science and Learning Center, a nonprofit that focuses on community education. The building is actually leased from the U.S. Forest Service, and is a retired visitor’s center. Because of the remote location, most people camp in the parking lot the night before and have access to the indoor restrooms. When I made my way inside the learning center on Friday evening before bedtime, I was also pleasantly surprised that many of the educational exhibits were still set up, including a small theater showing a documentary about the eruption and Mount St. Helen’s history. It provided amazing context for the adventure I was about to undertake the next day, and made this a family-friendly event. Even though the race has almost zero crew access, the area has plenty to offer for staying busy and sight-seeing while runners are on the course. 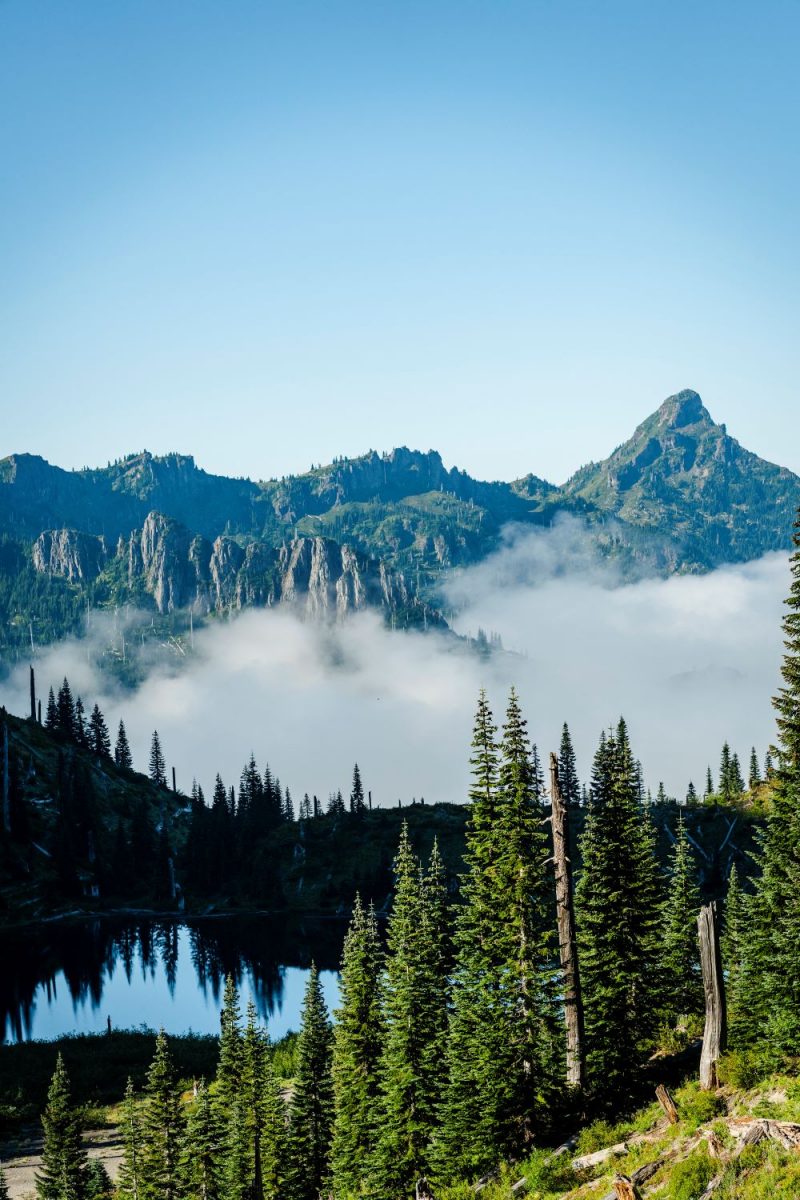 Race day started with a fog that did not burn off until mid-day. This made the day much more humid than I am used to, but also saved much of the sun exposure that I had heard about from years prior. The first part of the course was overgrown until AS1, about 5 miles in. This definitely made it hard to go very fast, even though looking at the course profile this was one of the “flatter” sections of the race. 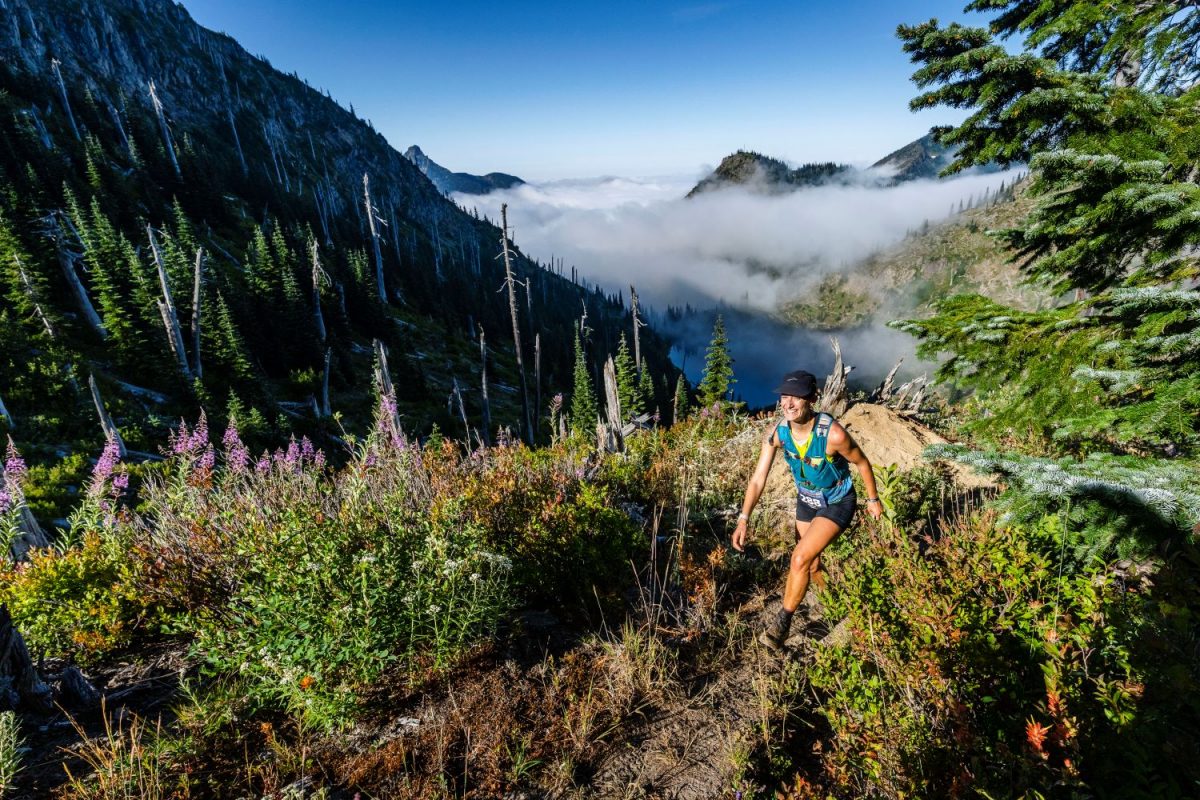 Then from AS1 to AS 2 (Bear Camp at mile 15) was a lengthy 10 mile section with minimal support. This section of the race was a test of strength, with a 3k’ climb in 4 miles which included a combination of grown-over trail interspersed with rocky side slope of the canyon. Jace Ives, 1st place finisher, also reflected on his fueling challenges during this 10-mile chunk of the race: “I came close to losing my hydration. The temps were relatively low, but I think the humidity was high, and golly-gee, I was sweating, probably even perspiring, but thankfully I had brought the water filter and squeezed a couple bottles while I was down in the lakes area, at a stream crossing.” T &T athlete Martin Allen also mirrored the sentiment that it’s very important to leave AS1 with appropriate nutrition:  “I stupidly didn’t bring any of my own trail nutrition to this event. My normal plan is to raid AS1 for free gels since I rarely buy them on my own, but when I got there I was told that there weren’t any until AS2. I quickly crammed whatever they did have into my mouth, but that meant over 10 miles before I could get anything else that would fit into my running vest. The weather was very forgiving, but at the same time it’s a hard course with a lot of climbing so if I could do it all again I would have brought and ate way more gels and salts.” Even with cooler temps, I also found myself taking a couple dips in the creek crossings to try to cool down with the long sustained climb. 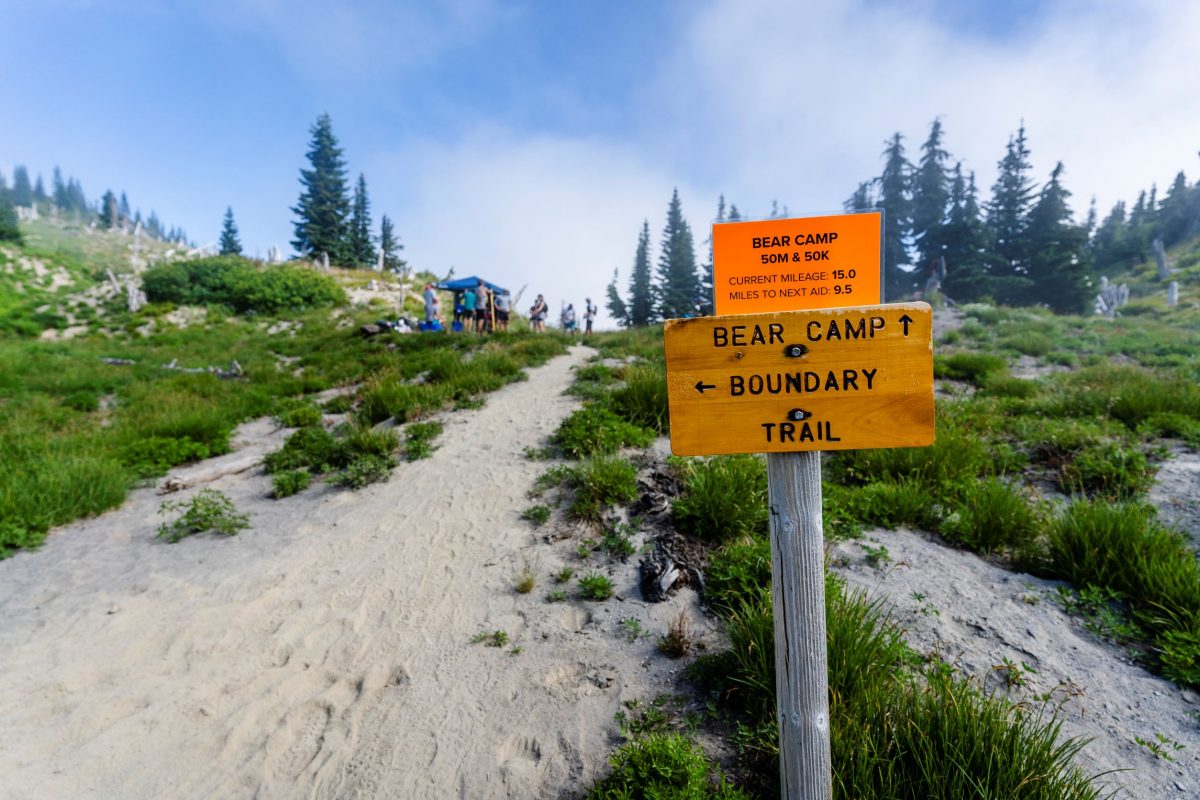 Bear Camp Aid, AS2 at Mile 15 signified the hardest climb was behind racers, but was also another 10 mile chunk to the next aid station. By this point, you are truly in the higher elevation territory and can enjoy a reprieve from too many overgrown trails, and instead enjoy the vast terrain. Kelly, T&T athlete stated it perfectly; the scenery makes runners think, “‘are you kidding me?!” She is a 2-time finisher of the race now, and says that the beautiful backcountry lakes were a big draw to come back and use this as a long training run for other upcoming adventures. Second place finisher Eric Budesa also noted that “the lakes, rugged ridgeline and big climbs and descents over passes all in a single loop course made this a true mountain experience.” Until the final aid station, the views are basically unending. 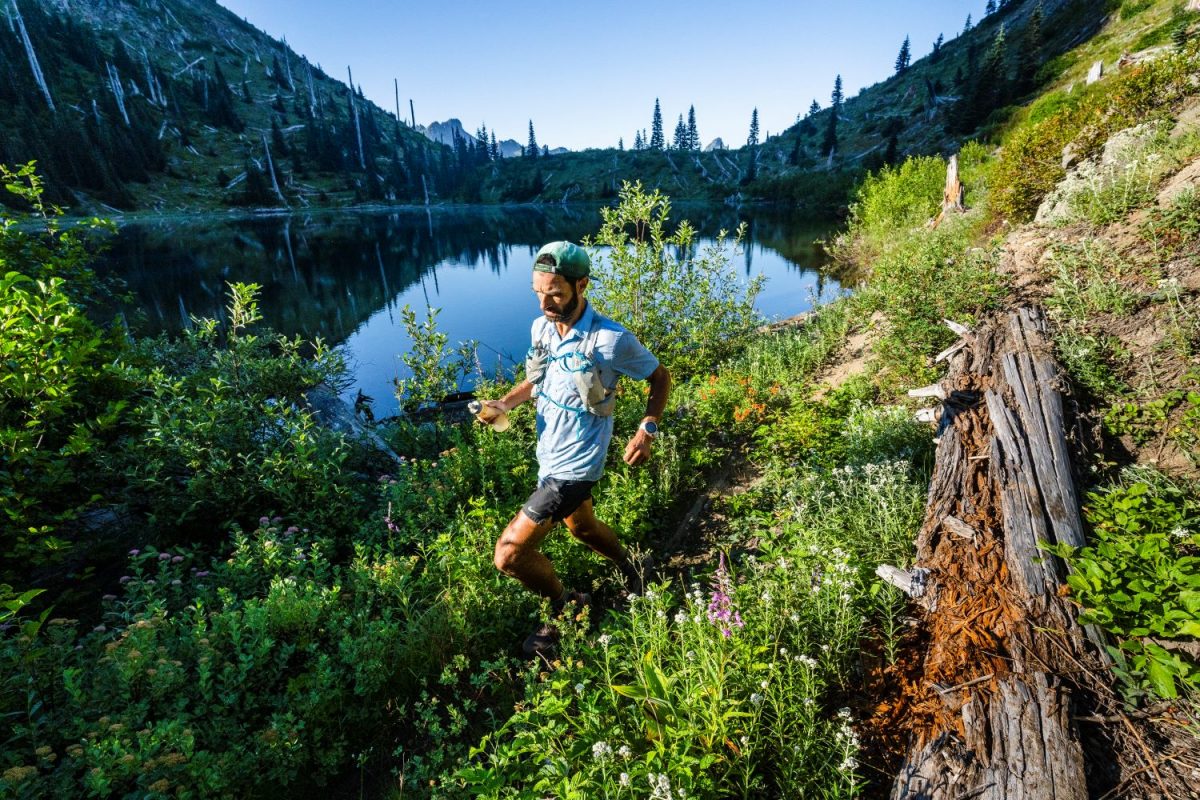 AS3 (Johnson Ridge, mile 24.5), then signifies the “home stretch” of the race. It felt like a luxury to refuel with cold Coca Cola, chips, and goldfish before the final 6.5 miles, as both the aid stations before had been so spaced out and required volunteers to hike in the supplies, limiting what was available. The few miles of trail  before and after this final aid station was also very heavily traveled by day tourists who were exploring the National Monument area. It was a welcome distraction to have tourists cheering on runners, but also hard to muster energy for trail niceties and trying to veer around groups going for leisurely hikes.

Finally, there is a final water station for racers about 2 miles from the finish. This is a full aid point for the 50 mile distance, but 50k racers are encouraged to conserve resources and only take water if needed.  From that point, I definitely had the sentiment of the finish line being so close, yet also so far, as the final mile of the race includes 500’ of gain on overgrown switchbacks. Finally the finish was in sight after the grueling last climb! 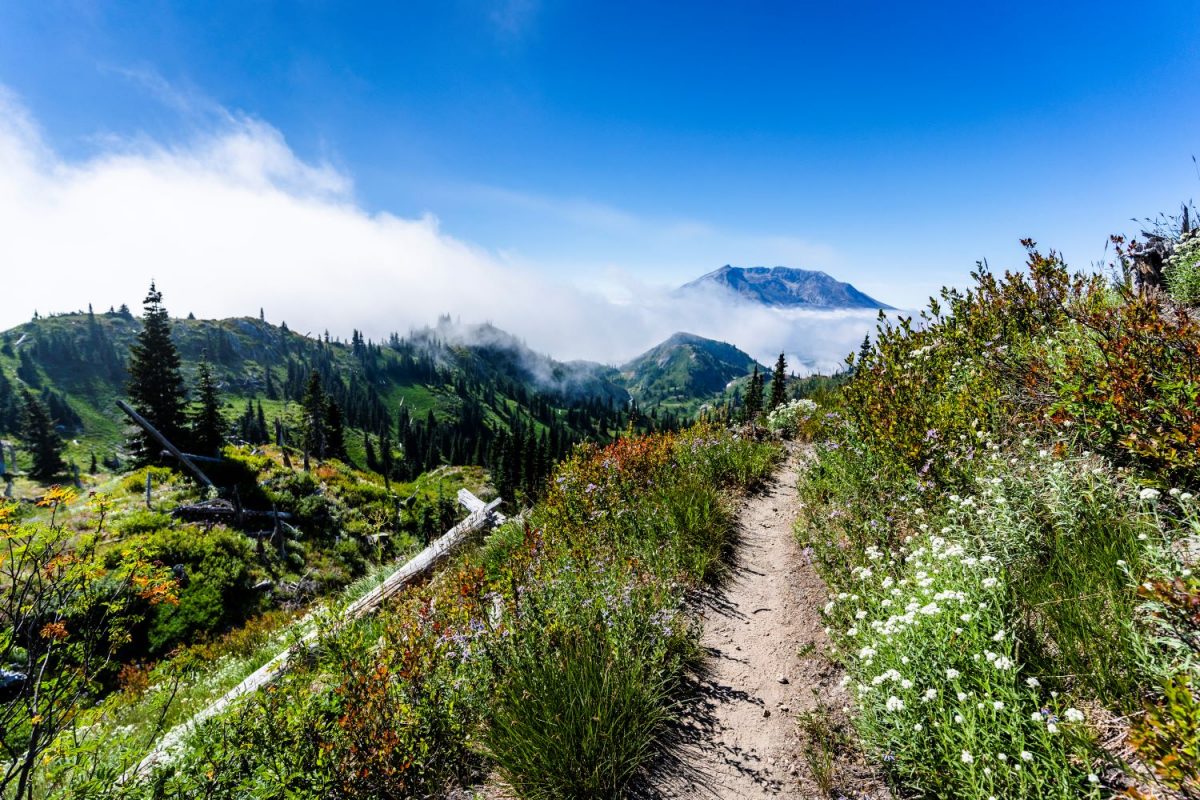 This was definitely not a “fast” course by any means. Knowing that this race is regarded as a challenging and remote backcountry experience, it lends itself to athletes pushing themselves mentally and physically to overcome challenges, rather than focusing on time or pace. From a coach’s perspective, that is more valuable than a personal best time. Being able to prepare this report and reflect on areas for improvement, while also celebrating successes, is one of the best outcomes I believe we can hope for as runners. This is definitely a run to add to your list.

Camelia’s Strava data from the race